Check out this awesome post on how to secure your home 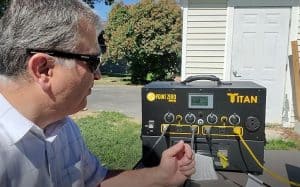 Testing this Titan Solar Generator was really fun for me. Solar generators are so much more advanced now than they were in years past. And Titan is currently the industry leader in so many ways. The Titan is so popular at the moment, demand has outpaced supply (especially during Covid-19). However Point Zero has assured us that they are taking steps to be able to produce enough to keep up with the demand.

The Titan Solar Generator is new on the market. It has many features corrected that many people have been asking for; complaints they have had about other solar generators. Depending on which kit you get, it is comparable to a 2,000 to 3,000 watt generator. I will go over the details of this more specifically in my below video.

To start please watch the below video. In this video I show you the Titan and even plug a bunch of devices into it so you can get an idea of how many devices it will run in an emergency. This a video I did for one of my other websites EmergencyPrepGuy.com.

In this article I am going to go over everything I talk about in the video, just perhaps in a bit more detail. I will talk about how the titan works, how you set it up, and how many electronic devices it will run. Let’s start with how the Titan operates.

How To Operate The Titan Generator 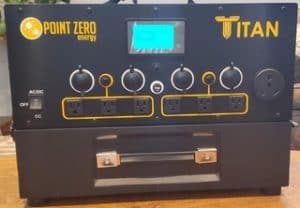 To start with as you look at the front of the Titan Solar Generator, you will notice that you have the top unit called the power module (that has the inverter in it), and then below that you have at least one black section with a handle (a battery). And you can pretty much add as many batteries to this system as you would like to, and can afford.

Power Switch: As you look at the picture on the left you will see a three option power on switch. The three options are 1. off, 2. AC & DC ports on, and 3. DC ports only on. And when you have the switch to off the power module completely disconnects from the batteries. So you can know that the AC & DC ports are not live.

DC Ports: The four round ports that look like cigarette lighters are the DC ports. All four of these combined can draw up to 20 amps without overloading this bank of DC ports. If you go over that and accidentally overload the ports there is a reset button that resets all of the DC and AC ports just above in the center of the four DC ports. And by the way 20 amps is pretty good compared to other solar generators currently on the market.

When you order a Titan Solar Generator it comes with four adapters that fit into each of the four DC ports. These adapters have both USB-A and USB-C ports in them that allow you to charge cell phones, tablets and other devices that use those connections. You can also plug devices designed to be plugged into a cigarette lighter into a DC port with the adapter removed.

AC Ports: There are two banks of three 120 volt AC outlets on the front of the Titan Solar Generator just below the four DC ports. Each bank of three AC outlets allows you to draw up to 15 amps for a total of 30 amps. Just above each bank of AC outlets is a reset button in case you accidentally exceed the 15 amps for that bank. You can add extension cords with multiple outlets that allow you to plug as many devices as you want into each of the AC banks, just as long as you do not exceed the 15 amps. Again a total of 30 amps of AC power from a solar generator is pretty good compared to the competition.

RV Outlet: On the far right of the Titan is a big plug that you can use to power your RV. It allows you to pull up to 30 amps as well, which I believe is the best on the market right now. 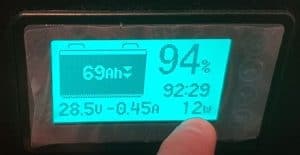 The display screen for the Titan Solar Generator is really easy to understand and quite handy. The picture of a battery in the top left hand corner shows an image of how fully charged the batteries are, as well as lists the amp hours (Ah) remaining. The two arrows next to the amp hours point up or down depending on whether your Titan is bringing in more power (charging) than it is using, or using more power than the panels or chargers are bringing in. Hopefully that makes sense.

The “94%” number in the top right corner shows the percentage of battery life left. Just below that is a number that displays either the amount of hours left at your current watt usage (if you are using more power than you are bringing in), or the time you have left to when the batteries will be fully charged (if you are bringing in more power than you are using).

And finally along the bottom it shows the net volts, amps and watts being used and brought in. For example if your solar powers are bringing in a full 2,000 watts, and you are currently using 1,500 watts with the devices you have plugged into the unit, the watt number would display 500 watts charging. If this is confusing you might go back up and watch that video again I have above because I explain this also in that video. 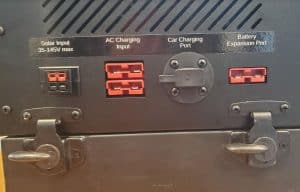 Third from the left is a port you can use to charge the Titan system from the cigarette lighter of your car or truck. The titan comes with a charging cord for this. One end fits into your cigarette lighter, and the other into this port.

Connecting Up The Solar Panels 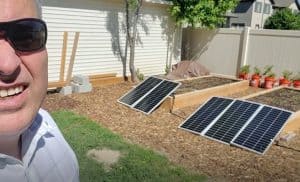 Then each of those connect to a longer similar cord that connects to an adapter that hooks into the Titan Solar Generator. Now just turn on the Titan, point your panels at the sun, and you are charging! It is super simple.

To use the panels if you have a south facing wall of your home you can just lean the panels against the wall so they face the south. (You don’t want to lay them flat on a lawn because they get too hot and will kill your grass.) However having them at a 45 degree angle on a stand gives you the ability to change the direction they are pointing throughout the day following the sun.

There are many stands for sale out there but they can be a bit expensive. Ben from PoweredPortableSolar.com made the below video showing you an inexpensive way to build your own stand for the Titan panels. If you are interested take a few moments to watch his video.

What Can I Run On My Titan Solar Generator? 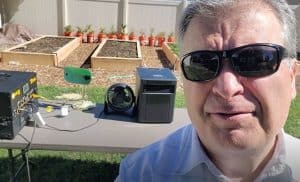 Now this is where the rubber meets the road. How many devices can I run at one time when using the Titan? This is especially important to know if you are getting your titan to prepare for emergencies.

The simple answer is enough items to draw between 2,000 and 3,000 running watts. I wouldn’t recommend maxing the system out. So plan to run it somewhere in the middle.

For example my wife and I have a smaller than normal refrigerator. It draws about 850-ish watts when you first turn it on and then once it is running it settles down to between 15 to 40 watts. That is pretty low for a refrigerator, but I digress.

So with the Titan Solar Generator you can run enough devices so that they total up to 2,000 or 3,000 running watts, depending on if you have one battery or two. (As I said earlier I think you should do a bit less because I don’t believe in maxing things out.) With the Titan you don’t really need to worry too much about starting wattage because the titan can handle up to about 6,000 watts as a surge without a problem.

The other thing to remember is the most solar panels you can have is enough to bring in 2,000 watts of continuous power. And in most situations you will only get 2,000 watts during full sun, which is usually about 5 to 6 hours per day. So if you are using more wattage than you are bringing in then your batteries will eventually run down. Then you will have to either charge the Titan with a gas generator (which will take 3 to 4 hours), or unplug some devices during the day and let the system charge.

Here is a great video explaining this input and output relationship of this solar generator. This is a video by Ben of PoweredPortableSolar.com showing how his family runs their small off grid cabin full time with the Titan.

All in all I can honestly tell you that I am very impressed with the Titan Solar Generator. It is more robust and powerful than other competing units I have seen. This one that I tested for this article was a loaner because the one I ordered is on back-order. And so now I am very excited for when I actually get the one I ordered.

I do think it is a good idea if you can afford it to also have a small gas generator too. That way if you get in an emergency power outage with limited sunlight you can charge up your Titan in 3-4 hours with the generator and then run the rest of the day on the Titan.

Well if you made it all the way to the end of this article then I want to thank you for taking the time to read it. And if you benefited from it at all, if I may I would like to ask you to please share this article on your social media sites and send it to your friends and families whom you think might be interested. We really appreciate it when our readers do that kind of stuff.

Thank you again for reading this article!

With a rich, warming reddish-brown appearance, mahogany is one of the all-time classic flooring woods. Learning more about mahogany helps you decide if it is the best wood for your floors. There...

Hi! I'm David. I spend every darn weekend I can working on home projects of various kinds. This includes whittling down the "honey do" list! This is the site where I share all of the projects I've done and things I'm learning. I hope that this will be a benefit to all of you as work on some of these projects as well!